Android vs iOS development. Which one is better for startup?

Android vs iOS development. Which one is better for startup?

When the iOS App Store was opened in 2008, there were 500 applications available only. Today, there are 1.85 million applications that end user can download and install. With over 2.56 million applications in the Google Play Store, Android users have a larger app world to choose from. It’s reasonable to state that we’re in the digital age at this time!

Did you know that there are currently more than 3.5 BILLION smartphone users in the world? According to the Statista-Smartphone User projection, the number of smartphone users is expected to expand by multiple time in a next few years

More gadgets linked to the internet than there are people on the planet, at ~8 billion. As a result, mobile applications can no longer be ignored as an essential component of our everyday life

If you’re a business owner considering developing an app for Android or iOS, the first thing you should think of is which platform is best for your needs

Apple vs. Android: Shares of the market

You can see from the chart Android has a strong lead in the global market share among all smartphones and is projected to continue to do so in the future. As a result, practically every smartphone manufacturer aside from Apple has adopted Android startup applications 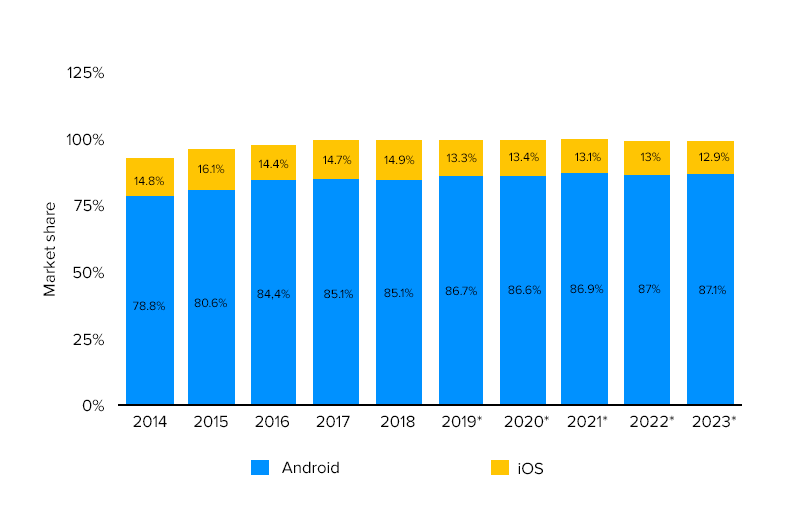 As an platform with open code, Android permits and facilitates the customization of the operation system by software developers. That means, you fork Android and get your own version of it, right

In the market forecast below, Google Play Store downloads will reach 196 billion annually by 2021. All indicates that we should expect only increase of global penetration of smartphones and apps

There will be 42 billion downloads from the iOS store. Android has once again surpassed all other platforms in terms of app downloads, and this dominance is only going to expand in the next years

In total, we are expecting to have around 300 billions of downloads 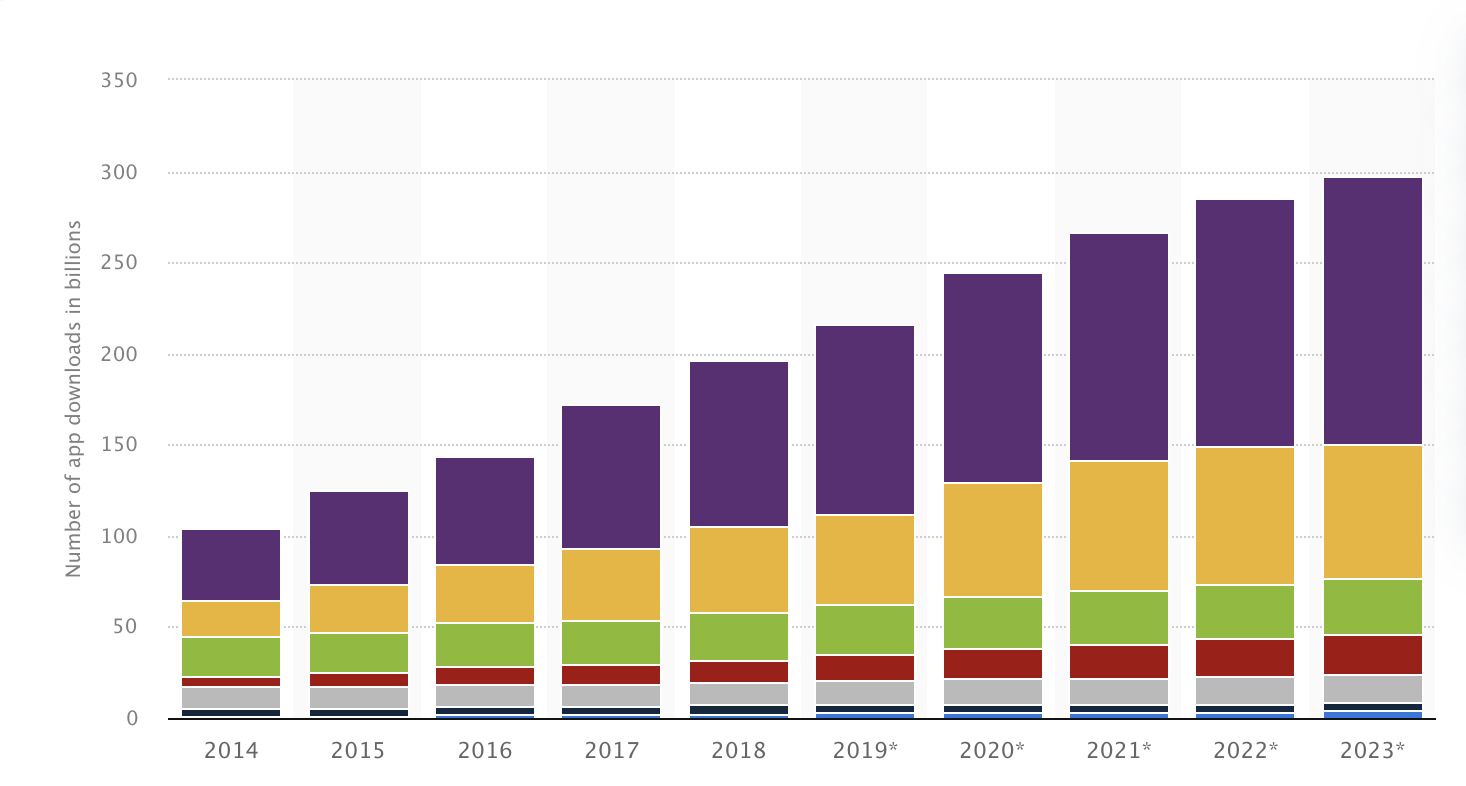 Which Is Better – iOS Or Android?

The dispute over Android vs. iOS development is as old as modern digital world. There is no one-word response to the question of which platform startup founders should use. Before making a choice, an owner should weigh pros and cons of several options

Let's take iterate over each factor:

Android users outnumber those who use iPhones by a substantial margin

On the other hand, there is no dispute that Apple is a high-end gadget in which people are ready to pay for apps. As a result, Apple consumers tend to live in more affluent areas of the world

More than 113 million iOS users presently reside in the United States, taking into account around 47 of 100 of all users of smartphone devices (47%) in the United States, according to Statista. Hiring iOS app development team is a good idea if you’re trying to reach people in the Western world

Basically, fragmentation means that multiple OS running on mobile used by a variety of consumers

Apple has complete control over iOS devices and their release dates. As a result, Apple synchronizes the release of iOS versions with the introduction of new devices approximately once a year. As a result, fragmentation concerns are low

When it comes to Android, however, fragmentation is common problem, making testing and quality control is a challenge for android app developers. As a result, the fragmentation of Android drives up the costs and duration of maintenance

Google Material Design has a larger impact on UI and UX design than any other design framework. When it comes to developing mobile apps, mobile app developers believe that Swift is a more user-friendly language than Java or Kotlin

However, the design and development of your mobile app is one component that relies less on the platform and more on their abilities. Based on our experience, iOS end app looks more smooth, on the Android, you have to worry about different devices and how the app would look on them. As a result on a design stage there might be some compromises

Now that we’re familiar with the influencing factors, we can talk about the advantages and disadvantages

Coding for Android and iOS are both complex tasks that require a strong understanding of programming concepts and the ability to write efficient, reliable code. However, there are some differences between the two platforms that may make one more difficult to code for than the other.

One difference is the programming language used to develop apps for each platform. Android apps are typically written in Java, while iOS apps are written in Swift or Objective-C. Java is a popular language that is used in many different contexts, so it may be easier for some developers to learn. On the other hand, Swift is a newer language that is specifically designed for iOS development, so it may be easier to use for certain tasks.

Ultimately, the difficulty of coding for Android vs iOS will depend on the individual developer’s background and experience. Both platforms have their own challenges and require a deep understanding of programming concepts, so it is important for developers to be well-versed in their chosen language and platform.

Android and iOS are both secure mobile operating systems, but there are some differences in the way that they approach security.

One key difference is the way that updates are handled. iOS has a more centralized approach to updates, with all users receiving updates at the same time. This means that security vulnerabilities are typically patched quickly across the entire user base. Android, on the other hand, has a more fragmented approach to updates, with different devices receiving updates at different times depending on the manufacturer and carrier. This can lead to some users running older, potentially less secure versions of the operating system.

Another difference is the way that app permissions are handled. Android allows users to grant individual permissions to apps when they are installed, while iOS requires apps to request permissions when they are needed. This means that iOS users have more control over what data and resources their apps have access to.

Overall, both Android and iOS have strong security measures in place, but iOS may have an advantage in terms of timely updates and granular app permissions. It is important for users of both platforms to keep their devices and apps up to date in order to ensure the best possible security.

The App Store and the Google Play Store are both online marketplaces for downloading and purchasing mobile apps. However, there are some key differences between the two platforms.

Another difference is the review and approval process for apps. The App Store has a more rigorous review process, with all apps being reviewed by Apple before they are made available for download. The Google Play Store has a more streamlined process, with most apps being available for download within a few hours of being submitted. This means that it may be easier to get an app onto the Google Play Store, but the App Store may offer a higher level of quality control.

Overall, the App Store and the Google Play Store are both popular platforms for mobile app development, and the choice of which one to use will depend on the needs and goals of the app developer.

What are the Benefits of Android Apps for businesses?

If you don’t have a certain demographic or target audience in mind, you should go with Android first. Also, Android is a better choice if your mobile app requires a lot of customisations

There are many benefits to using Android apps for businesses, including:

Some additional advantages of Android platform:

A vast number of people throughout the world use Android smartphones, which provides you access to a big number of prospective customers. Without Android app you’re missing out on a huge market and potential customers

As Android platform with open code, that making it open-source platform, there are no fees associated with utilizing it. Whereas, Google also gives tools for Android app development and modern libraries to developers at no cost from its own resources. Thus, the cost of an Android app is lower than the cost of an iOS development

There are several advantages to using this service, including the fact that it will save you money

Samsung, Oppo, Xiaomi, and other hardware makers all utilize Android as their primary operating system

Android app development gives engineers freedom to create apps that are unique. When it comes to developing a mobile application, means your company needs will be met in a way that would not have been feasible on any other platform. Outsourcing an Android app development team to assist you with your new startup app is always a good decision

Once you’ve uploaded your software to the Google Play, you’ve opened yourself up to a huge audience of prospective customers. The ROI on your software for Android platform would be immediate and always on the higher end, given the cost of Android app development, because your target market is so large

As a result, Android has become the platform of choice for a variety of industries with interoperability requirements

If you want to reach out App Store target audience, you should construct your brand new mobile app for iOS platform by investing in a well-respected iOS development

The advantages of using iOS apps for startups will be discussed:

Apps which operate sensitive information, should make security a must-have. When it comes to security, Android applications pose a significant threat, but iPhones are well-protected from viruses and other forms of hacking. Compared to Android, iOS apps have more strict security safeguards in place to secure their firmware and software

In terms of return on investment, iOS apps outperform Android ones. Keep an eye on the blunders, tips and techniques, and other related information that you may receive from your process of iOS application development, and you’ll get the benefits. There are companies specialized in iPhone app development that may assist you in turning this dream of yours into reality

Apple’s most distinguishing feature is the company’s long list of loyal customers. As far as technology and software are concerned, Apple is unmatched. Apple has a well-established consumer base that is devoted to the brand because of its quality and performance. So it is stated that once a smartphone user encounters the iOS platform, they will never be content with any other operating system and will remain with Apple

When it comes to software updates, Apple typically creates just one every year. Apple’s market share is also lower than Android. As a result, Android apps should be thoroughly tested to ensure that they work properly on all versions of the Android OS

iOS apps, on the other hand, just have to fulfill the testing requirements of their prior iOS versions in order to be approved. Apps may go to market much more quickly thanks to this method. This also reduces the expense of ios app development

There is no one-size-fits-all answer; rather, it all depends on your needs. We’ve come across situations where the iOS platform is a better fit, while Android is a better option in other cases Native VS Cross Platform Mobile Application. How to pick up right?

Briefly about Native VS Cross Platform mobile applications If you&rsquo;re unsure if your next mobile app should be …